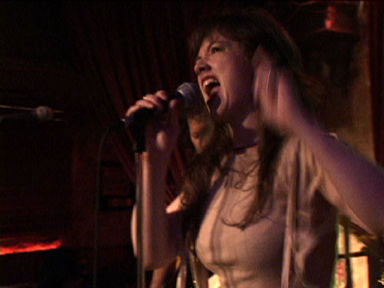 Meredith “Babe” Borden, cosmic blues coloratura, has been singing the notes between the notes for years. From studies at the New England Conservatory of Music in Boston and touring in Broadway and operatic repertoire (HAiR, Phantom, Pirates of Penzance, The Marraige of Figaro, to name a few) to performances with The Microtones and heavy rock band Swallow, to interpreting Baroque music with the Queen’s Chamber Band in performances at Merkin Hall, Borden has mastered the ability to hear and reproduce vocally the subtle shadings of an infinite spectrum of pitches, and is a remarkably versatile performer.

Borden has been pioneering her own virtuosic microtonal style for years, influenced by her early studies in microtonal music with performance master, Joe Maneri. Borden’s unique blues voice is drawn from the floating sounds emanating from Mississippi Delta artists such as Tommy Johnson and Skip James. Borden has performed in recitals, musicals, concerts and operas all over the world including a four month European tour of the American tribal rock musical HAiR. Borden has worked with James Rado, one of the original writers of HAiR, on various projects, in addition to singing rare HAiR material with him as part of the Hoboken Blues Be-In (HBBi), produced in 2005 by Borden and headlined by Willie McBlind.

Borden has worked with such musical icons as Meredith Monk and Philip Glass in original music theatre works, and is a regularly featured vocal soloist with American Festival of Microtonal Music in a variety of repertoire by composers such as Harry Partch (The Potion Scene, among other songs) and Julian Carrillo. In the summer of 2002, she performed and recorded the gospel-blues role of Compassion in the opera Waking in New York by Elodie Lauten about Beat Generation poet Allen Ginsberg which features his own original writings.

With partner of 14 years, Jon Catler, Borden can be heard as lead vocalist on FreeNote Records CD’s Birdhouse and Evolution for Electric Guitar and Orchestra. She can also be heard on Elodie Lauten’s double CD release Deus Ex Machina and Waking in New York, and the DVD recording of Lauten’s Orfreo in which Borden portrays the featured roles of Persephone and Crow – all 3 of these works are released on 4-Tay Records. For several years, Babe has been lead singer of the psychedelic electric Delta blues band Willie McBlind led by Jon Catler – in April 2007, they released their debut CD Find My Way Back Home. Borden has always been fascinated by birds and birdsong and definitely feels that our winged friends are the finest singers on the planet.